Last year we had a honey bee hive relocated to our back yard.  We put it at the edge of the woods and behind the shed where they would get less noise and not direct sunlight so as to not get too hot in the summer.  We also put up a small fence so that our big dog would not be too curious and upset them.  We have a rocky pathway from the veggie beds to behind the shed that leads to the picnic table where the bee box lives.  What I did not realize is how many weeds would grow up between those rocks.  I am not a huge fan of weeding around a bunch of buzzing bees. The husband doesn’t like to weed at all. Well the queen swarmed and left half the hive behind without any queen, so what remained died.  Alas we will try again this upcoming spring. But until then I get to kick butt on trying to make a better pathway, so no weeding will need to be done around the hive.

I first started making concrete stepping stones in order to make a pathway down to the creek.  They are adorable and work okay, but I think we need much larger, sturdier steps for getting down to the creek, and I would not mind a hand rail either, it is so steep. I still have around 30 stepping stones that I made earlier this summer, most of which are still in the shed continuing to cure. I have been bringing them out one at a time to paint and waterproof, and set aside for placement on the First of March.  The husband and I decided that we can use the stepping stones in among the rocky/pebble pathway back to the bees. Much better pathway with less weeds and when we start laying them down we can add a barrier under where the rocks are so that no more weeds come through.

I discovered earlier this summer that my first three stepping stones were good and sturdy, being and inch thick each. I thought well maybe I can make them thinner and they will be much more cost effective for us.  Well when I made this paver we didn’t know it was too thin.

When placed in the pathway down to the creek I was able to walk carefully on it just fine.  But I am small and did not think how it would hold up to a bunch of guys going down to the creek to fish. Well the step cracked in half, and then in half again.  Live and Learn!

So the rest of my stepping stone are going to be too thin no matter where I put them.  This means I need to thicken them up.

Well take this step that I just finished painting the top. I just flipped it over. I mixed up concrete pretty thick and chunky ( be careful not to make it too runny I didn’t want it running down overy the counter everywhere) just a small amount at a time so that I wouldn’t have too much.

I mix small amounts in a disposable cup with a disposable knife.  Then I used the knife and spread the concrete on the bottom side of the step like I was icing a cake. 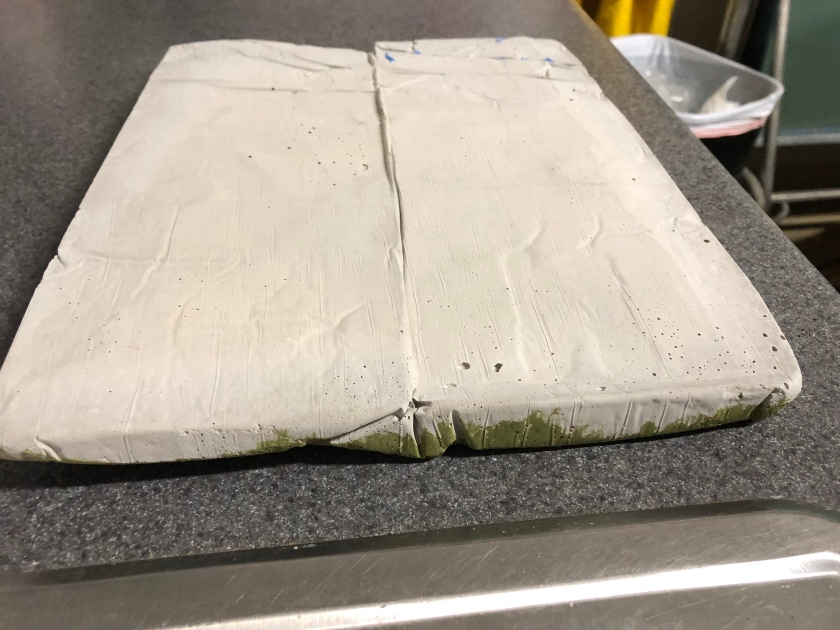 This before photo shows it was kinda thin and it also shows where the bottom of the cardboard box came together. The other step first cracked right along this line perfectly.

This after shot shows the old half of the step with its new sturdy backer. It really is as easy as helping it slide out of the mixing cup and spreading it out evenly with the knife, its easier than cold butter on fresh bread.

I am letting it harden up for 24 hours in the garage, and then bring it inside to the painting table to harden completely for 2 days, then it will be put in storage to cure for 30 days then I can waterproof front and back and then back into storage till spring!

As you can see- the step doubled up in thickness quickly and easily.

Bonus!!! Below are a few of my other stepping stones that are in process!